Map of the Dialectal Division of the Bulgarian Language 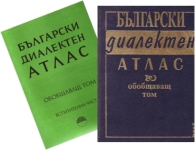 The maps of the Reviewing volume (368 in total) have been compiled on the basis of material collected from more than 2300 places across the entire language area, mapped in 11 regional atlases, 6 of which have already been published.

The atlas consists of 28 maps of general dialect features. 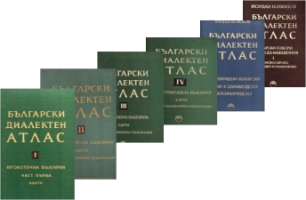 The series includes monographic studies which examine the Bulgarian dialect systems from various regions of the language territory.

The series includes over 30 dialectal dictionaries, most of them accompanied by short descriptions of the dialects. A few of the works in the series are devoted to lexicological research.

Nine studies have been published dedicated to the phonetic, phonological and word-formation problems of the Bulgarian language.

The Bulgarian participation (pp. 355-479) is represented by L. Vasileva, S. Keremidchieva and M. Vitanova, who prepared the materials for printing (from 15 places) for the Carpathian Dialect Atlas. The work is a contribution to the applied scientific research. At the same time the contrastive research has theoretical significance for determining the interrelations between different groups of languages.

A Concise Dictionary of Dialect Words.

The Dictionary includes more than 6000 dialect words which can be found in Bulgarian literature studied in school.

This is the first systematic study of general and Bulgarian dialectology. It examines the specific features of the Bulgarian dialects on different linguistic levels. The research topics also include the social dialects and the relations between the Bulgarian literary language and folk speech. M. Mladenov’s article Bulgarian “Dialects in Vardar and Aegean Macedonia” is included in both editions. Bibliography has also been extended.

This work is the first extensive and detailed research of one of the main word-formation categories of nouns which analyses the word-formation types in the Bulgarian dialects from the entire language territory. A comparison has been made with the literary language by highlighting the dialects’ word-formation specifics.

On the basis of material from the entire language territory, this work makes a complete characterisation of one of the main word-formation categories of nouns in the Bulgarian language. The comparison with the literary language outlines the dialectal word-formation special features.

The monograph presents a complete description of the phonetic, morphological, accentological and syntactical features of the grammatical system of an old Rhodope dialect spoken in the Ropkata region (near the town of Asenovgrad in the Khvojna Valley).

The research is based on collected authentic material from people who originated from the village of Zarovo (Thessaloniki Region) destroyed in 1913. The work contains a dictionary of about 8 000 lexemes, historical, demographic and ethnographic data about the village, as well as a detailed lexico-semantic characteristic of the dialect.

The work presents a volumetric German lexical material (borrowings and hybrids) in the Bulgarian dialects (regional and social). Phonological, morphological, accentuation and word-formation analysis of borrowings in dialects and folklore has been performed.

The detailed linguistic description of the old-time and present day town is performed on the basis of personally collected material and a thorough study of archival and published sources.

This book presents the first complex ethnolinguistic research of the former village of Kamenitza, nowadays a district of Velingrad town. For the first time information at all linguistic levels has been presented of the historical Kamenitza dialect which is significant for the dialectology.

Kiril Parvanov. Prefix Perfectivation in the History of the Bulgarian Language. Accepted for publication by the SC with report No. 6/ 06.10.2008