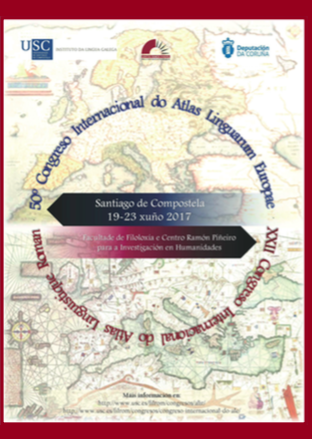 Bulgarian researchers have taken part in the sessions of the 50th International Congress of the European Linguistic Atlas (ELA) in Santiago de Compostela, Spain (19-23 June 2017). The Atlas aims to reflect the linguistic and cultural diversity of Europe at a dialect level. It publishes linguistic maps and extensive linguistic commentaries on the dialectical names of the basic lifestyle concepts of Europeans. The Atlas network includes 2,631 settlements in Europe, illustrating languages ​​from different language groups: Celtic, Roman, German, Baltic, Slavic, Ural, Semitic, Albanian, Greek, etc. The dialectologists from the Institute for Bulgarian Language “Prof. Lubomir Andreychin” participated with a report contributing to the map “Names for Rye in the Dialects”.

On the eve of Enyovden, a unique local custom was demonstrated at the conference – games around a fire under bagpipe accompaniment. At the feast, the women wear wreaths of fresh flowers on their heads, and people jump over the fire “for good health”. This custom and its atmosphere amazingly resembles some famous Bulgarian customs. Such examples are a clear proof of the place of the Bulgarian people in Europe since ancient times.