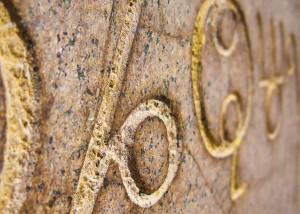 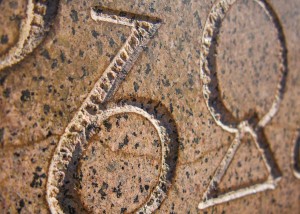 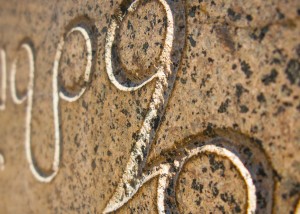 The first Old Bulgarian alphabet – the Glagolitic script, was created by St. Cyril the Philosopher as an original graphic system, in which each letter represents one sound, and the letters for sounds with similar characteristics are similarly depicted. Most scholars accept the year of creation of the Glagolitic letters to be 855, as stated in the work “On the Letters” by Chernorizets Hrabar.

The Glagolitic script was used in the first translations from Byzantine Greek into Old Bulgarian and in many of the original Old Bulgarian works dating from the Golden Age of Bulgarian Culture during the reign of Symeon I. The Glagolitic alphabet and the first Glagolitic books were consecrated by Pope Adrian II during the visit of St. St. Cyril and Methodius and their disciples to Rome between 867 and 869.

In the spring of 886, the disciples of St. St. Cyril and Methodius were greeted with honours in Pliska, the capital of Bulgaria at the time. Knyaz Boris I provided them with excellent conditions for their literary work and teaching. These years marked the establishment of the first literary centres in Bulgaria – first in Pliska and after 893 in Preslav. Knyaz Boris I and his successors were well aware of the need for spreading the Christian faith among the newly baptised Bulgarians in their native language so he provided substantial funding for the creation of the necessary liturgical literature and the schooling of well-versed clergymen in order to replace Greek with Old Bulgarian in the liturgy – an important step towards an independent Bulgarian church. Thus, the alphabet and literature became a stronghold of the spiritual identity of Bulgarians. Glagolitic books were thriving in the literary centres of Pliska, Preslav and Ohrid. St. Clement of Ohrid, St. Naum of Ohrid, John the Exarch, Constantine of Preslav, Gregory the Presbyter, Chernorizets Hrabar and Symeon himself, who later ascended to the throne, created rich and versatile translational and original literature in all genres of the medieval Christian literature.

At the end of the 9th and the beginning of the 10th century the second Bulgarian alphabet – the Cyrillic script, was introduced in the First Bulgarian Kingdom. Later on it has been named in honor of St. Cyril to mark the continuity of his immortal work. There are no credible sources for its authorship. According to the contemporary researchers of medieval Bulgarian literature and culture, the most probable hypothesis is that the Cyrillic alphabet was created by the scholars of Preslav supported by Symeon.

The creation of the alphabet is only one, albeit a very important, step of the deed of St. St. Cyril and Methodius. Their most important contribution is in establishing the first Slavic literary language – Old Bulgarian, which became the third classical language in medieval Europe, along with Greek and Latin, and the rise of the Old Bulgarian literature, which laid the foundation of a third civilization in Europe – the civilization of Slavia Orthodoxa.

The medieval Bulgarian books spread to the Slavic world to be used and copied for centuries, and the Old Bulgarian language was adopted as the liturgical and literary language by other nations. Nowadays, over 250 million people around the world, mostly in Europe and Asia, use the Cyrillic letters.

The Bulgarian alphabet has been the third official script in the European Union since 2007, when Bulgaria became its member. The deeds of the holy brothers are so significant that centuries later Pope John Paul II by his Apostolic Letter “Egregiae Virtutis” declared St. St. Cyril and Methodius co-patrons of Europe.