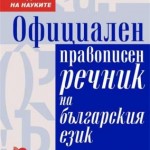 The dictionary features terms used in the teaching of the Bulgarian language and literature, as well as commonly misspelled words.

The volume contains new, original contributions to some aspects of the history of modern standard Bulgarian as a Slavic, Balkan and European language, which has not been investigated until that point. A wide range of questions have been discussed – departing from the basis of the Slavic philology and the place of Bulgarian among other Slavic languages, through the contributions of particular scholars for the research on specific syntactic, morphological, lexical and orthographic problems of the language during the Bulgarian Revival, and to a new treatment of the relation between the forming of the Bulgarian nation during the Revival and the development of the standard language.

The collection contains the principle positions of researchers from the Institute for Bulgarian Language regarding the legislative aspects of the language policy in Bulgaria. A variety of problems are concerned – the practice and the experience in connection with language legislation and policy in the Balkans and around the world, the problems of the national languages in the European Union, as well as the possibilities offered by the contemporary language technologies. (Members of other departments also took part in the project.)

Problems of the Bulgarian Grammar System

(Bulgarian linguistics, 1.)
Disputable and unclarified problems mainly regarding the noun system of modern standard Bulgarian are discussed in the collection. Comparative analyses with some Slavic languages and other European languages are applied.

This is the first – and so far the only – academic grammar of modern standard Bulgarian.